One of the reasons I began this blog was to highlight the contradictions that seem to be everywhere on the Left. I believe I have found the motherlode of contradictions in this op-ed piece in the Wall Street Journal by Steny Hoyer.

Just about everything in this piece is wrong, innacurate, false, or a Democrat talking point. In other words, instead of the truth, we get everything but.

Americans may be wondering whether the Greek financial crisis could happen here.

There's a myth that our budget deficit mess sprang into existence at the presidential inauguration on Jan. 20, 2009. But in truth, more than 90% of the projected deficit we will face over the next decade is the result of President Bush's 2001 and 2003 tax cuts, the wars in Afghanistan and Iraq, the rescue of the financial sector he began in the last few months of his presidency, and lower revenues from the recession.

Um, no Steny, that's not a myth. Take a look at this chart and understand that the deficit was coming down under Bush despite the attacks of 9-11 and two wars. 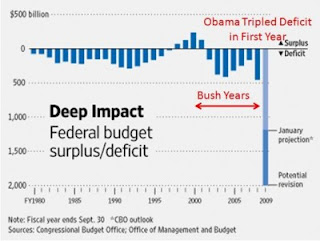 As this shows, the explosion in debt actually began with the Obama inauguration. You convenently omitted the $787B Stimulus and the muti-trillion dollar Health care bill, just to name two.

You're trying, you really are, Steny. Perhaps you finally looked out your window and saw a Tea Party rally.

It's along about here that Steny begins to confuse the issue of deficit spending and private sector spending. I think he's talking about the massive new costs incurred in the takeover of the private healthcare industry, but that's not entirely clear.

Health-care costs, as I noted, are one of our main challenges. According to the Congressional Budget Office the health-care bill will put us on a path to bring down those costs, incorporating many of the best ideas from both Republicans and Democrats.

Now, correct me if I'm wrong, but aren't those health care costs a direct result of your recently passed Health care bill? Weren't those costs previously borne by the private sector? And weren't Republicans shut out of any negotiations?

On a host of other issues, President Barack Obama also showed his seriousness about fiscal restraint. Oh, really? See the chart above. His budget freezes nonsecurity discretionary spending and cuts our deficit by more than half by 2013, and more than $1.3 trillion over the next decade. You mean the budget is frozen at this historically high level of spending? He signed a bill to reform weapons acquisition and target cost overruns at the Pentagon. Do you mean cancelling the F-22 and the space based Laser Defense system, leaving us vulnerable to this? And he joined me and others in the successful push to return to the pay-as-you-go law that requires Congress to find a dollar of savings for every extra dollar it spends on entitlements or tax cuts, except for legislation responding to a legitimate emergency. That same law you've broken numerous times since Obama took office?

Mr. Hoyer, you and the Obama administration have vastly increased the national debt all by yourselves. Yet you continue to blame President Bush as though he held the strings of Washington's purse. Perhaps you're counting on the American people thinking that the president controls spending, when actually that's the responsibility of you and your fellow Congress members. This dangerous level of spending falls directly upon your shoulders, as will the responsibility of any negative consequences that result from it.

You are responsible, Mr. Hoyer, not George Bush.

But wait! There's more! Bend over and get ready, America.

On the other side of the equation, nobody likes raising revenue—but sometimes it's necessary.

It's only necessary because you and your progressive cohorts in Congress, along with the Obama administration, are hell-bent on spending us into third-world status against our will.

You somehow think that money grows on trees. I, and many other Americans can assure you that this is not the case, Steny. You can either begin to cut the size and scope of our government and reduce the deficit without raising taxes, or we can vote you out of office in favor of someone who will.
Posted by BackwardsBoy at 11:57 AM