I ran across this video on Breitbart’s Big Peace website yesterday. It’s a story that you should be aware of regardless of your locale.

The article reveals that over $1M was raised from that mosque and sent to Gaza for use by the terror group Hamas.

Very interesting indeed. Not only is there a local player engaged in supporting Hamas, but this mosque appears to have ties to our current Governor, Charlie Crist. This could be big. It could sink Crist’s Senate campaign. Naturally, this blog wanted to find out more about this potentially explosive story.

Since this happened where I live, I naturally assumed that our local newspaper would have more information. So, off I went to the Orlando Sentinel’s website where I found, wait for it…nothing. Nada. Zip. Zilch. Not one article or even the mention of a very serious matter involving local ties to the global terrorist movement and our own Governor. I did discover, however, that Paris Hilton was “embarrassed” to have her SUV searched.

How curious, I thought. Well, maybe I just didn’t look hard enough, or the article appeared a few days earlier and I missed it (I’ve learned over the years to suspect operator error first). OK, I’ll do a site search and see what happens. I entered the search term “Hamas” and received this message: “Did you mean hams?” 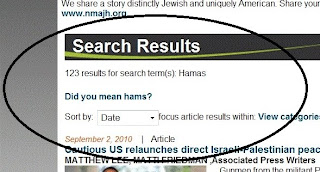 This isn’t good. How are we to combat terrorism in America when we don’t even know about it? I seem to remember a time when newspapers had things called “reporters” whose job it was to report on these things called “stories” so we could be “informed” about important issues, particularly ones that involved our national security and the security of other countries. In the case of terrorism, this is even more important since terrorism targets innocent civilians in defiance of international law and rules of combat.

I searched some more, specifically looking for local news outlets who might have written about it. Still nothing. I did find lots of links to the story, but none of them were from traditional local news gatherers. How can this be? Surely, someone in town must be covering this story. It is a local story with international implications. Doesn’t that kind of make it a big thing? Kind of?

After all, don’t most local news outlets pride themselves on being “first on the scene” of local news? That’s what I see in all of their advertisements. So why the silence on this story? Where’s all the breathless reporting?

Having reached a dead end in my quest for local links to this story, I decided to call someone who might know would be covering this, Tom Trento, Director of Central Florida Security.org, who produced the video. During our telephone conversation, he confirmed that there were no local news organizations currently covering this story to his knowledge, but there may be one in the pipeline.

This still isn’t good. If the folks who broke this story weren’t aware of anyone else covering it, what is the average citizen to do? More importantly, why are traditional news organizations such as the Orlando Sentinel silent?

Why are they covering this up?
Posted by BackwardsBoy at 12:13 PM