The current stalemate in Wisconsin offers us a good lesson in how not to operate a government. Public sector union pensions are in the process of causing a genuine meltdown of the state’s budget, draining monies from needed infrastructure into pension plans that the rest of the working populace can only dream about. This budget crisis has been brewing for decades, with unions seeking ever-increasing benefits that seemed almost reasonable during good economic times. However, the tenuous nature of our economy, which has been teetering on the edge of fiscal responsibility for years, has awakened the good citizens of Wisconsin and America to the fact that we can no longer continue to give the unions each and every little thing their hearts desire. Wisconsin Governor Scott Walker puts it plainly when he says, “We’re broke.”

One only needs to listen to Richard Trumka and his outrageous Socialist rhetoric to know that this has been planned.

While teachers call in “sick” and unscrupulous doctors write fake notes so the teachers can get paid to protest, the parents who have to take days off to tend to their children or pay daycare are not amused. The rest of the country is starting to see the unions, rightfully, as the spoiled children that they are. As the details of the unions’ demands emerge, we’re seeing that the public sector unions have an awfully sweet deal, with above average pay and benefits that the average American doesn’t have.

While the rest of us are tightening our belts, the unions are screaming that their rights are being taken away from them, that Governor Walker is Hitler, or a dictator like Egypt’s Mubarak, or any number of other false, immature accusations. 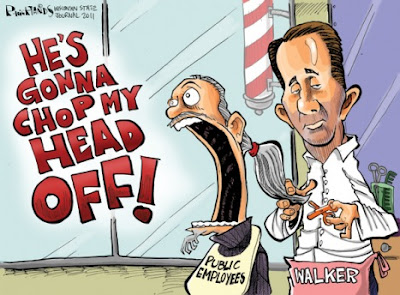 Cartoon by Phil Hands of the Wisconsin State Journal.

Wisconsin’s Democratic senators are no better, fleeing the state rather that performing their sworn duty to uphold the state’s constitution and effectively manage the budget.

Sports fans, this is exactly what happens when we choose the wrong people for elective office.

Mr. Boy, you ask, how do we know when we’ve done that? What are the signs of corruption in politics?

It’s simple. It’s also Standard Operating Procedure in Third World Countries. One hand washes the other, scratch my back and I’ll scratch yours, or its most eloquent title, Quid Pro Quo. It’s called by several names, but the principle is the same.

And it’s not how our government is supposed to work.

In a perfect world, a political donor would contribute to a candidate on principle, and expect nothing in return except good, honorable and honest government in accordance with the Constitution. Everyone would benefit indirectly from this, as the economic tide would rise for all the ships.

But this has been twisted into corruption where today a donor expects (quite wrongly) a direct benefit from a campaign donation. Nowhere is this perversion of the Constitution more evident than in the waivers the Obama administration has given to cronies to avoid the onerous restrictions of ObamaCare, over 700 so far.

One could argue (quite rightly) that this action is unconstitutional. What’s the point of passing a law that only applies to Americans of a certain political affiliation? This action clearly runs counter to the Equal Protection Clause in the Fourteenth Amendment. You don’t need to be a constitutional scholar or a Supreme Court Justice to understand the simple principle that everyone is equal in the eyes of the law.

I’m frankly surprised that the Supreme Court hasn’t already weighed in on this aspect of the administration’s selective enforcement of the law. While I haven’t studied the details of the various states’ lawsuits seeking relief from ObamaCare, this should be the first item on the agenda. What use is the High Court if it will not to step in and warn this administration that it’s violating the Constitution?

It’s just this simple, either we adhere to the nations’ legal foundation, or we don’t. It’s written in plain enough language that people (except certain writers for the New York Times) can understand it.
Posted by BackwardsBoy at 11:14 AM

Quid pro quo like Scott Walker agreeing to take a trip to California where the Kochs can "show him a good time" in exchange for busting the unions?

Oh, and what about the _contracts_ the state signed with the unions? Since when does a party to a contract get to unilaterally break the contract?