I'm sure all fourteen of you have seen this link to the UK Independent's website that outlines just some of the details that our vaunted Journ-O-list media won't report.

We received warnings of a credible threat of violence 48 hours prior to the attack on our Benghazi embassy. No defensive action was taken.

Sensitive information concerning Libyans who were aiding us was taken in the attack. These folk are now in danger, as they could meet the same fate as Ambassador Stevens.

The safe-house that Ambassador Stevens was taken to came under fire from mortars. This suggests a well-coordinated attack, not a mob. Its location was supposed to be secret.

This picture says it all... 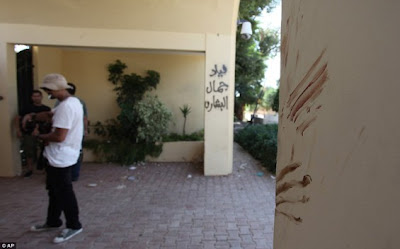 Posted by BackwardsBoy at 10:55 AM