It's Friday and time to feign interest in soccer, or as the Europeans call it, football. Team USA plays their opening game against the Mother England tomorrow at 2:30 pm. I'm told that even if we lose this game, we're not out of the competition. Meh.

I'm sorry (not really) but our American version of football is far more engaging, what with all the running and the tackling and the feats of athleticism, and that's just the cheerleaders. And I'd put two Oakland Raiders fans against ten of England's best hooligans any day.

Here are the parents of a typical Oakland fan. 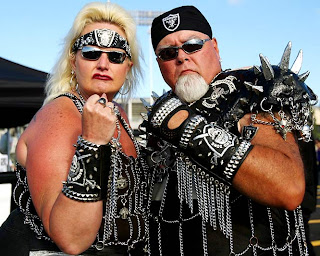 (courtesy of SI Kids)
Here's what they're up against. An Australian backpacker in South Africa for the soccer World Cup passed out drunk in the driveway of a Johannesburg politician under the impression he was in Cape Town.

What soccer fans may lack in looks may now be helped with the latest in cosmetic surgery - Dimpleplasty.

Here's what happens when you American history is viewed through the distorted lens of postmodernism - A warning label on the Constitution of the United States. I predict a flood of nastygrams, and well-deserved ones at that.

File this under the "psychology" tab of this blog. Two villains are thrown on the analytical couch. - Darth Vader and Barack Obama.

Enjoy.
Posted by BackwardsBoy at 11:33 AM