Can We Finally Get Serious About Terrorism Now?

Osama bin Laden has received his final reward in this life. I gain no small comfort in knowing the last thing that went through his mind was American lead.

As the details surrounding the operation emerge, it’s becoming clear that the policies and practices put in place by George W. Bush in the wake of the 9/11 attacks worked. Rendition, secret prisons, Gitmo and “enhanced interrogation techniques” were what led to the success of this operation.

The irony is that they were vehemently opposed by our current president while he was a freshman congressman.

Reality has a way of doing that. It provides a certain clarity of thought.

Now, can we get down to business and finally start acting like we have enemies who want to kill us?

The cynic in me thinks that this operation had far more to do with campaign optics than anything else. President Obama now has the reputation as The Man Who Killed Liberty Valance Osama bin Laden. There’s no doubt OBL deserved his fate, but given what we know about Al Qaeda’s operations, he was more of a figurehead due to his high profile. His fame worked against him and caused him to take a less active role in the day-to-day activities of that group of animals. That doesn’t diminish the danger, as someone else will surely be glad to assume the distinction of being the world’s most wanted man, probably Al-Zawahiri. It also doesn't diminish the symbolism of us taking out the world's worst enemy.

We can and should expect the attacks to continue even after the symbolic head of the AQ snake has been cut off. This really changes nothing. We are still faced with a determined, patient and cunning enemy that has proven its willingness to kill anyone, be they men, women, or as we recently saw in Jerusalem, small children, (innocents all) to advance their religious beliefs.

It could be that Obama will borrow a testicle from George Bush and finally get serious with terrorists. That would still leave GWB with two. Until Sunday, the contrast couldn’t have more stark between them. It’s painfully clear that Obama owes his predecessor a great deal for his success in taking bin Laden out. A simple “thank you” would suffice for Mr. Bush, I’m sure, but I’m not gonna hold my breath waiting for one, and neither should he.

We have a golden opportunity to turn the global war on terror to our favor. We could choose to demonstrate our national determination to rid the earth of terrorism and its adherents and advocates whenever and wherever we find them.

There is only one way to do that. It’s a proven method that works every time it’s tried.

We start killing them.

If you’re somewhat taken aback at that statement, it may be due to the fact we hadn’t used that strategy against our enemies until Sunday. In fact, we haven’t used that strategy for quite a while. All you need to do is look at the Rules of Engagement that our fighting forces are forced to comply with in the Mideast to understand that we seemingly have no interest in winning a war.

Here’s an example of the stupidity of these rules from the good folk over at Flopping Aces:

… occasionally there are riveting communications, such as a recent e-mail from a noncommissioned officer (NCO) serving in Afghanistan. He explains why the rules of engagement for U.S. troops are “too prohibitive for coalition forces to achieve sustained tactical successes.”


Receiving mortar fire during an overnight mission, his unit called for a 155mm howitzer illumination round to be fired to reveal the enemy’s location. The request was rejected “on the grounds that it may cause collateral damage.” The NCO says that the only thing that comes down from an illumination round is a canister, and the likelihood of it hitting someone or something was akin to that of being struck by lightning.


Returning from a mission, his unit took casualties from an improvised explosive device that the unit knew had been placed no more than an hour earlier. “There were villagers laughing at the U.S. casualties” and “two suspicious individuals were seen fleeing the scene and entering a home.” U.S. forces “are no longer allowed to search homes without Afghan National Security Forces personnel present.” But when his unit asked Afghan police to search the house, the police refused on the grounds that the people in the house “are good people.”


On another mission, some Afghan adults ran off with their children immediately before the NCO’s unit came under heavy small-arms fire and rocket-propelled grenades (RPGs), and the unit asked for artillery fire on the enemy position. The response was a question: Where is the nearest civilian structure? “Judging distances,” the NCO writes dryly, “can be difficult when bullets and RPGs are flying over your head.” When the artillery support was denied because of fear of collateral damage, the unit asked for a “smoke mission” — like an illumination round; only the canister falls to earth — “to conceal our movement as we planned to flank and destroy the enemy.” This request was granted — but because of fear of collateral damage, the round was deliberately fired one kilometer off the requested site, making “the smoke mission useless and leaving us to fend for ourselves.”

Well, that worked out according to plan, didn’t it? Their plan.

It seems that hiding among the civilian population while not wearing uniforms works to our enemies’ advantage. If only there were some way to, oh, I don’t know, maybe make that sort of combat illegal. Maybe a bunch of governments could get together and outlaw that type of warfare. Then that’d sorta make the playing field a little more even while our soldiers are getting shot at, wouldn’t it? That might even be a more civilized way to fight a war and be a bit less dangerous for the civilian population, eh?

If only there was a way to do that…

Oh, wait. There is! It’s called the Geneva Conventions and it just so happens that they did outlaw the use of warfare by non-uniformed soldiers. They even have a name for those who engage in that type of warfare. Believe it or not, they call them “illegal combatants.” Wow, who knew? We can even kill these “illegal combatants” when we catch them. Again, who knew?

I ask you, gentle reader, who would fall under such a designation? Osama bin Laden? He would, were he still alive. How about Khalid Sheikh Mohammed? Did he not plan the 9/11 attacks? That sounds like an act of war carried out against civilians by someone who didn’t wear a uniform? How about Al-Awalaki or however his name is spelled? Isn’t he doing the same thing by encouraging attacks on American interests?

How about all the Gitmo detainees? Weren’t these guys all captured on the battlefield sans uniform?

The evidence seems to point to an enemy that doesn’t abide by the rules of engagement that the rest of the world agreed to many years ago in an effort to restrict warfare to those with the hardware to wage war. But for some strange reason, we’re not exercising our agreed-upon right to execute them. Why?

I know why and you do too. It’s because there are certain people who think we can win the "hearts and minds" of our enemies by being nice to them. The unfortunate thing is that many of these people reside in Washington and are actively engaged in preventing our troops from winning these wars. Note the insanity in sending the most effective fighting force the world has ever seen to some foreign land and then telling them they can’t kill their enemy who’s shooting at them, hiding among the civilians to use them as shields and who don’t wear uniforms.

Even more insanity is on display in the effeminate disdain of those on the left who are against the use of so-called “enhanced interrogation techniques” on “humanitarian grounds.” They claim “we’re getting down to their level” by using anything more than harsh language on them. That we, as Americans, have a moral imperative to be more civilized than our enemy and refrain from anything that closely resembles violence against our enemies.

Really? Tell that to the thousands of innocent Americans who died on 9/11, many of whom leaped to their death. Tell that to Daniel Pearl, who was beheaded while he was still alive and whose murder was broadcast on the Internet for the world to see. Who got tortured and killed: Khalid Sheikh Mohammed or Pearl? Does KSM still have all his fingers and both eyes and ears? Can he walk, talk, and eat? If he suffered no physical damage, how has he been tortured? Who cares if he has a rather pronounced facial tick and is now deathly afraid of napkins?

This attitude of supposed moral superiority is leading us to do things that fly in the face of both common sense and our traditional history of directly confronting our enemies with deadly force. When a crime is committed, do the police start looking for random people or do they start looking for someone who fits a description of the suspect?

Let me show you a picture of the 19 hijackers and then ask you a question. 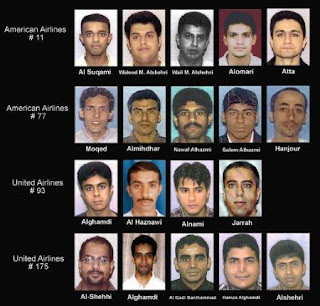 Do you see any 6-year-olds?

Then why is the TSA patting them down?

We could stop this by the application of the oldest means of persuasion against an enemy. I’d even go so far as to say that we could stop patting down 6-year-olds at airports and stop handing over all of our deadly shampoo if we’d do one simple thing. After making sure that we had every bit of information from every Gitmo detainee using whichever methods got results, we then executed what was left of them. Preferably on pay-per-view.

And announce it to the rest of the world. Let them howl. Then point out that these animals are in open violation of the Geneva Conventions, loudly and often, while also pointing out that we are acting within those agreed-upon rules. Every time some human rights group held a press conference to chide us for collateral damage, we’d remind them of why innocent civilians were put in that situation in the first place by the actions of the enemy, not by us. Why we aren’t doing that has been a source of curiosity and frustration to many ever since this they started this war against us some thirty years ago.

War has been, and will always be about who thinks they can be more aggressive. By willfully showing weakness in the face of aggression, we are doing more to invite that aggression than any good will that might be gained by being nice to our enemies. In case those in Washington haven’t noticed, our actions are not responsible for muslim hatred of us. Their hatred of Americans (and “infidels” in general) is instilled in them at an early age. If it weren’t Gitmo, they’d invent another excuse to kill us. By bending over backwards to appear all civilized and stuff, we’re doing ourselves more harm than good and giving them the victory. If you think for one moment they aren’t gloating over forcing innocent American children to be frisked at our airports, you’re wrong.

So, will we capitalize on the momentum that’s clearly on our side following the successful eradication of OBL? Will we finally dedicate ourselves to fight a war on terror and win it, so we can get back to normal and rid the world of this affront to true civilization?

Will we start making our enemies fear us for a change?
Posted by BackwardsBoy at 12:39 PM