Ignoring a seriously depressed economy, four-dollar-a-gallon gasoline and a ten percent inflation rate, President Obama took to the campaign trail in Texas yesterday to talk up immigration reform and talk down to Republicans, conservatives, and anyone else who dares to think that we should actually enforce our existing immigration laws.

The president said “we have gone above and beyond what was requested by the very Republicans who said they supported broader reform as long as we got serious about enforcement. But even though we’ve answered these concerns, I suspect there will be those who will try to move the goal posts one more time. They’ll say we need to triple the border patrol. Or quadruple the border patrol. They’ll say we need a higher fence to support reform. Maybe they’ll say we need a moat. Or alligators in the moat. They’ll never be satisfied. And I understand that. That’s politics.”

No, Mr. President, that’s smug condescension on your part, which I guess passes for politics to you. We’re still waiting for you to get serious about enforcement. We wonder why you aren’t stopping the flood of illegals across our Mexican border. We wonder why you’re intent upon suing the state of Arizona to stop their recently passed illegal immigration law that closely mirrors the federal law you refuse to enforce.  Jake Tapper does a bit of fact-checking Obama's speech here.

We wonder why there are signs like this anywhere in America. 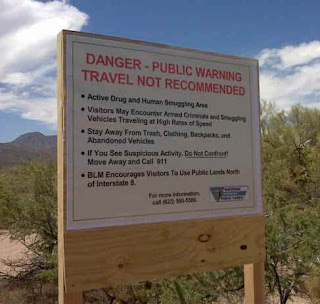 We wonder why we tolerate the environmental destruction that those illegals cause. Why aren’t the greenies outraged at the 225 tons of trash they left behind in 2010? The 13.5 tons of tires? The 77 vehicles abandoned and removed?

How about the fact that Phoenix, AZ is now one of the world’s most dangerous cities due to the high and rising number of kidnappings by drug cartels? Janet Napolitano recently stated that the Mexican border is safe. I guess since she can’t see it from her office window in Washington, she thinks it is. Pinal County Arizona Sheriff Paul Babeu begs to disagree, in front of a Congressional committee no less.

Not to mention the potential for terrorists to cross into America unnoticed. This alone should be sufficient cause to secure our southern border, especially now that known terrorist groups are established in Mexican border towns.

President Obama is more than happy to confuse legal and illegal immigration for political purposes, and he’s not alone in using that tactic.

“…Obama is pitching his immigration argument to the larger public, refining it in a way that goes to Americans' pocketbook concerns. White House officials say Obama will emphasize the economic value of reforming immigration laws, noting that immigrants account for a substantial share of business start-ups and patent applications, among other things -- activities that create jobs for everyone.”

Those are legal immigrants, with whom no one has a beef. If you want to come to America and do so through our traditional (and legal) method of application, then we welcome you as we always have. It’s those who enter this country illegally without regard for our laws that we’re concerned about. Illegals working under cover and for less wages impact our economy negatively, displacing American workers. It’s no coincidence that Mexico’s second greatest source of national income (behind oil revenues) is from illegals in America. Count in the states that strangely give public benefits to illegals and the costs outweigh any benefits.

We don’t need immigration reform. We already have a pathway to citizenship, but to hear the President and many others speak, we don’t.

And if the Democrats or Obama thought for a minute that any of these illegals they want to give amnesty to might vote Republican, they’d be the first ones to close the Mexican border.

You can hang your ten-gallon hat on that, pardner.
Posted by BackwardsBoy at 1:20 PM