It’s a sad fact of life that many politicians can’t understand the very simple concept of cause and effect. It’s playing out before their eyes, and yet they can’t see it.

But for the rest of us who populate the World Outside the Beltway, the concept is as plain as day. Well, almost. I’ll explain that one later*.

It should be a standard that’s taught first in any basic economics class. The relationship between supply and demand is well established and is a simple fact of economic life.

Except, of course, to that subspecies of humanity called Homo Regularis, commonly known as the modern politician.

Anymore, when addressing these people (as opposed to my readers, who are the most intelligent and well-informed people anywhere), I feel the need to use small words and type verrrrry slooowly, so they can understand the simple principles that the rest of us take for granted.

Now, when you and I read that headline, we think that gas prices will go up even more, mostly because they will. That headline may as well say, “Obama Administration Seeks Higher Gas Prices for Americans” because that’s pretty close to the truth, if not dead-on accurate.

We know that if we aren’t drilling, then the supply of oil will be less, resulting in high prices at the gas pump. It’s not rocket surgery.

So, if we know this simple fact of life, why don’t our politicians also know it? After all, weren’t they also raised and educated right here in the good ol’ US of A? Popular wisdom is popular because it needn’t be taught in a classroom; it comes out in casual conversation as just one of those things that everybody knows.

There’s only one other reason for their seeming ignorance of supply and demand: they are doing this knowing full well what the result will be.

I was willing to give President Obama the benefit of the doubt for a while. I, along with anyone else who had the slightest bit of curiosity about the man who would be our President, knew that he had never run a business nor even ventured much outside of the ivy-ed walls of academia except to organize some communities in that bastion of political verisimilitude, Chicago. So, I was willing to wait for a while he used his political training wheels to tool around the Oval Office.

But after two and a half years of having access to the awe and wonder that is the greatest information-gathering organization of all time in the Federal Government, it’s time to start questioning his intentions.

It appears, through his words and his actions, that he’s doing this on purpose.

Mr. Boy, you might ask, whatever would give you that idea?

Oh, nothing, gentle reader, except this clip that I never get tired of running.

*Explanation time – Here’s a Marist poll that shows that Americans really don’t understand the concept of supply and demand all that well, or at least the Americans whom Marist polls. 34% think that the evil oil companies are to blame for the price of a globally traded commodity. This ignores the simple fact that everyone in the world pays more when the price of oil goes up.

Did anyone else notice something about that Fox article, namely who they quoted?


...Eric Grafe, Earthjustice’s lead attorney on the case. Earthjustice was joined by Center for Biological Diversity and the Alaska Wilderness League in challenging the air permits.

Hmm, that’s funny. Three radical, left-wing environmental groups determining whether or not we can drill for our own oil? I coulda swore that’s why I voted, so my elected representative could make that kind of decision, doing what's best for the country, like they're suppose to…

Oh well. I guess that’s the way things work up there in Washington. I’m just a simple fellow with a computer. And a printer. And did I mention I need to get some gas today?

And did I also mention that I just might leave one of these taped to the pump? (h/t  Instapundit) 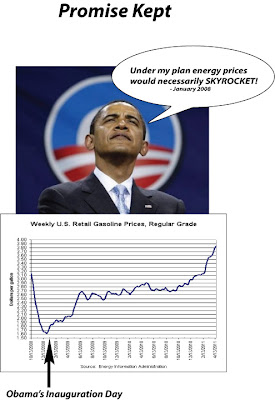 Posted by BackwardsBoy at 1:05 PM