I guess since Bill Clinton was our first black president, Obama had no choice but to assume the mantle of our first Irish president. This week's European leg of the Osama bin Laden victory tour included stops in England, Ireland and Poland.

And there were *ahem* memorable moments at each stop.

Embarrassingly memorable. In fact, President Obama personified the stereotype of the ugly American like no ugly American before him.

You wonder what the folks in the White House whose job it is To Know These Things are really doing. The British press had a jolly good time following the President and showing his staggeringly inept staff and lack of rudimentary protocol.

Even before the trip to England, Obama was, shall we say, not warmly received. Here are Nile Gardiner's Top Ten Insults Agains Britain. From the article,

“The US president will no doubt be careful not to offend his hosts when he travels to London, and he will receive a warm welcome from the Queen and the Prime Minister, as any American president would. But the prospect of an embarrassing diplomatic gaffe or insensitive remark cannot be ruled out from a world leader whose administration has all too often specialised in them.”

Little did Mr. Gardiner know what would happen. 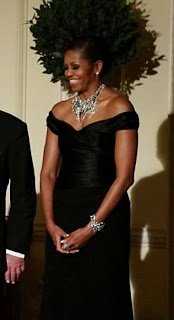 Did someone mention an embarrasing diplomatic gaffe?


Not content to embarrass the US in England, the Obama entourage then moved on to Ireland where the president and first lady downed a pint of the world's greatest beer, Guinness. What did that innocent pint do to deserve such a fate?

Michelle didn't like it, not one bit. In fact, she appears to have found a bug in her beer in the photo at the link. Arthur Guinness would not be amused. As every Guinness drinker knows, it's literally impossible to take a sip and not be rewarded with a smile.

Someone should have told the President that he couldn't drive afterwards...

While not directly related to this incident, London police have issued fines to Obama's entourage for causing congestion. I question the timing.

And just to prove that Obama considers all the world to be equal, Poland's Lech Walesa snubbed Obama and will not meet with the fellow Nobel Prize winner.

And the trip isn't over yet. Here at home, Republican presidential candidate Tim Pawlenty tweets this zinger, "@BarackObama sorry to interrupt the European pub crawl, but what was your Medicare plan?"


And Mitt Romney is a generous soul. He sent some leftover pizza to Obama's campaing headquarters in Chicago with a note that read, "Luca Brasi sleeps with the pepperoni."

An eager country awaits the return of its president from Europe. Things are so bad here that even dogs are panhandling.

Y'all enjoy the Memorial Day holiday and thank a soldier.
Posted by BackwardsBoy at 12:36 PM