Corrected and Updated per The Ministry of Unemployment Information.

As if we needed any more evidence that Progressivism is a destructive force to our economy, today's new unemployment figures show the rate is increasing. It also notes that June's anemic job numbers were revised downward from 80,000 jobs to just 64,000, a little news item that's conveniently omitted from most news outlets.

In other words, Obama's plan is working.

As I've noted before, these numbers are somewhat misleading since they count the total number of Americans in the active workforce, which has been greatly reduced over the course of this recession/depression. If you were to accurately compile this figure, it would be far closer to 11% than the already-awful number of 8.3%. And that's just the U-3 category, the best-case scenario.

The other metric, the U-6 is a far better figure for showing just how bad this administration's economic policies have become.


A measure that takes into account those who have stopped looking for jobs as well as those working part-time for economic reasons has hovered near 15 percent. The so-called "real" unemployment rate, or U-6 measure, is above 20 percent in Nevada and California.

"So-called "real" unemployment rate?" I'm not sure if that's an attempt at snark on the part of CNBC or not. I guess that falls under the "Lies, damned lies, statistics and CNBC reports" category. Anyway, here's their explanation...

The government's most widely publicized unemployment rate measures only those who are out of a job and currently looking for work. It does not count discouraged potential employees who have quit looking, nor those who are underemployed — wanting to work full-time but forced to work part-time.

For that count, the government releases a separate number called the "U-6," which provides a more complete tally of how many people really are out of work.


The numbers in some cases are startling.


In a normal world where everything wasn't backwards, this administration would be changing its policies away from increasing regulation. But, nothing of the sort is coming or should be expected from this group, the majority of whom have never held jobs in the private sector, nor owned their own business.

If you'd like a better big picture of the failure of Obama, here's a not-too-confusing chart that shows job growth for presidents from 1948 through today (shamelessly stolen from Ace). 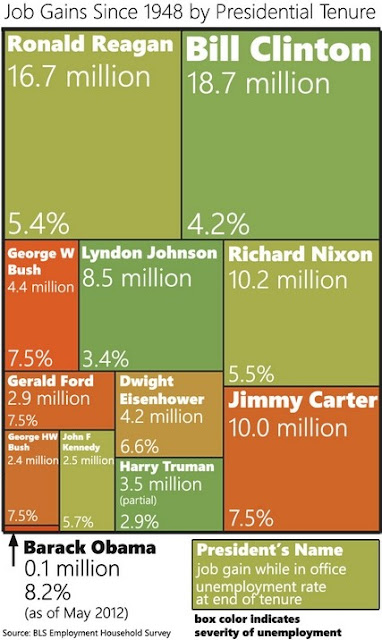 Notice that itty-bitty space in the lower left-hand corner? See who it belongs to? That tells you everything you need to know about the Obama administration's job performance. It's what those of us out here in the real world call "results."

Posted by BackwardsBoy at 9:49 AM