It's becoming an effort just to keep up with the daily barrage of news coming from Washington. Perhaps it wouldn't be so difficult if what we heard every day didn't fly in the face of logic and common sense.

Empty of restraint, of responsibility, of concern for the effects such a large number has on an already struggling country in the midst of an economic crisis. Full of hubris, of largess, of misguided priorities about the role of government in the lives of a free people.

We simply cannot continue to spend as if deficits don’t have consequences. As if waste doesn’t matter. As if the hard earned tax dollars of the American people can be treated like Monopoly money.

You'd also expect that same person to be grounded in fiscal reality when he proposes a spending freeze instead of this: 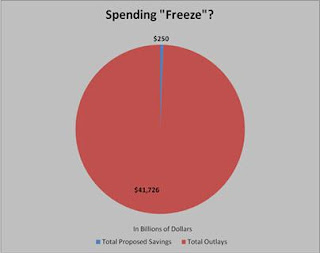 Given just these two examples, you can't help but wonder at the chasm that separates Obama's words from his actions. Sure, he sounds concerned, but his actions and results show a disturbing disconnect with reality.

In politics, there is an axiom that "Perception is reality." Many Americans rightfully percieve that those running our country, those that we entrust to operate our country in a responsible and adult fashion, have no idea what they're doing.
Posted by BackwardsBoy at 12:13 PM