Showdown in Wisconsin: The People vs. the Teachers Unions

If you didn’t see it already on the news, Wisconsin governor Scott Walker has introduced a bill that will finally release the stranglehold that the state teachers union currently has on the budget. After years of ever-increasing demands from public sector unions, many states are finding themselves at the breaking point. Their budgets are overdrawn due in large part to the outrageous amounts of money these unions have demanded and gotten. In fact, most state’s public sector union members receive benefits and pay that would make a mobster blush.

This just happens to tie in with a commenter’s remarks from the other day. I’m so proud that I got a comment here on the Internet’s best-kept secret, I have to share it:

I find it interesting that most rural/republican districts spout a rhetoric that doesn't match the reality when it comes to smaller government and fiscal self-sufficiency. Across the country I see that these are the districts that receive quite a disproportionate amount of money from the government compared to what they put in. While the liberal "welfare" bastions of urban areas foot there bill.

I know I’m carbon-dating myself when I say this, but there was a time when local tax money was put towards things like road and bridge repair, or infrastructure maintenance as it’s now called. Today, a disproportionate amount of this money is going to pay the for the very comfortable benefits for public sector union workers, many of whom don’t even contribute to their health care insurance like private sector workers do. That’s why local governments are forced to look to Washington for help, even with all the strings that come along with it.

In short, we’re slowly coming to the realization that public sector unions are bleeding the nation of tax dollars. It’s about time we started fighting back.

And if you think that the unions won’t mobilize to try to stop this common sense move by the officials who were elected to do so, you must be at work.

They’re protesting today at the state capitol. They’ve even enlisted students to march and called in sick all across the state so they could be seen protesting.

As you can see and hear, the students don’t have the slightest idea why they’re marching, they’re such good useful idiots. If one of those were my child, I’d yank them back home and file charges against the teacher for kidnapping so fast their head would spin. If parents need a permission slip to take their own child off campus, how did the teachers get them to the protests?

Was it a field trip to teach them about ecology? 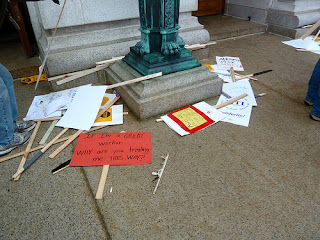 Maybe it was a civics lesson. Hmm, how about teaching the kids that unions take the members’ dues and support overwhelmingly far-left Democrat candidates, many times against the member’s wishes and political beliefs. It’s no secret that the Democrat Party depends heavily on contributions from these unions. They contributed a great deal of money to Barack Obama’s presidential campaign, which may explain why he chose to insert himself into the fray in Wisconsin by saying this,

“Some of what I’ve heard coming out of Wisconsin, where you’re just making it harder for public employees to collectively bargain, generally seems like more of an assault on unions. I think it's very important for us to understand that public employees, they're our neighbors, they're our friends.”

Yeah, Mr. President, they’re our friends, friends who are emptying our bank accounts. Just like all my friends do.

If you’d like a bit of insight into what passes for the thought process of a public sector union worker, here’s a little taste…

While visiting a state agency in Springfield recently I had the opportunity to engage a nice, professional looking, college educated, 30ish worker in conversation. What started with my making pleasant conversation while waiting for a transaction to complete, asking how long he/she had worked there and what was his/her previous job, quickly turned into an astonishing conversation to me, although the employee thought his/her thoughts were completely normal.

…When I asked what the person's previous job had been, the person answered that he/she had been with another state agency previously and applied for this position when it came open. "Do you like it better here," I asked. "Oh yes, much better. I wanted to move here because the union is better at this agency."…

…The person then told how much he/she mistrusted "management" and didn't think "management" ought to be able to approve days off. I asked if he/she really thought managers are always that bad.
"Absolutely. The workers need protection from management. If we don't have protection, you know, these people are just going to tell us to do things we shouldn't have to do and fire people. We need protection."

"Do you really think other people you work with or all managers are that bad?" I asked.

"Absolutely, you have to have protection. The managers are all going to take advantage of you if you don't have the union. You know these legislators, the ones who say their gonna just cut budgets so everyone loses their job, we have to have the union protection from them. They just want to fire everyone."…

…"You know our state is literally bankrupt. We have massive deficits. Don't you think the people have a right to elect new people to cut government to the level we can afford to pay for?"

Then the big one. The question and answer that chilled me.

I asked, "Well, you know those legislators are the representatives of the people. The people elected them to vote for the policies they want for our government. So our boss is really the people, who we work for. That's who the legislators represent. Don't you think the people should be respected who fund us through paying taxes and make decisions through the vote?"

"No way. I don't have any respect for the people. The people are the worst of all. No, they shouldn't be able to make that decision. They should just pay the taxes if we need more. They don't know what we do. They have no business telling us what to do."

Here's another reminder, just in case you're still not ready for a drink...


Behold your tax dollars at work.

Many thanks to the Morons over at Ace of Spades.
Posted by BackwardsBoy at 1:21 PM