After watching and hearing the wrangling over the budget battle from afar, I’m not optimistic that conservatism will win this round. What I’ve heard and seen has been so far removed from reality that it’s starting to resemble a circus. Not that Washington politics has ever been rooted in reality, but this is getting ridiculous.

As a bullshitter par excellence myself, I must say I’ve never heard so many lies of commission and omission in my life.

Let’s start with a few facts, shall we? Our esteemed President’s favorite sport, right after golf, is blaming his predecessor George Bush for each and every little thing that’s currently wrong with our economy, from the debt, to inflation, skyrocketing gasoline prices, to post-nasal drip and painful rectal itch. It’s what he does.

Well, that may have worked for a while, but two and a half years into his term, that just doesn’t cut it anymore. One thing is very clear: Obama owns this economy, lock, stock, and rotting barrel.

I’ve been wanting to run this graph for a while, since everyone else in the blogosphere has. I know, me, Alabama, slow, etc. 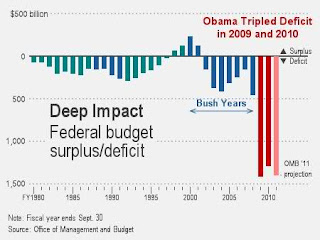 We Who Follow These Things So You Don’t Have To know that Congress was taken over by the Democrats following the little fit the American voters had in 2006 when they tossed Republicans out in a grand display of displeasure with their spendthrift ways. They had controlled Congress and the White House and yet had failed to rein in spending.

Granted, we were in two wars, which always tend to be rather expensive affairs, but the economy was still roaring along. If you remember, the Mainstream Media looked upon any downturn in what we’d all gladly return to today as signs of the Coming Apocalypse. I’m sure y’all remember when the talking heads claimed DOOM! (Hi, Monty!) when the unemployment number figure rose a mortifying two tenths of one percentage point.

President Bush was an economic terrorist! Soon, dogs and cats would be sleeping together, there would be a river of evil slime running through New York sewers, oh, wait, that was a movie, never mind.

Still, I think today, everyone in the country would gladly go back in time to the days of essentially full employment and nonexistent inflation.

And just so everyone remembers, here are a few numbers from those days that the MSM said were so horrible: Unemployment was dreadfully high at 4.6% Gasoline was an unthinkable $2.25/gal. (Click on the History tab)

As the chart above clearly shows, this debt crisis didn’t start until the Dems controlled Congress and Obama became President. Bush’s TARP was just the beginning of federal spending, soon to be followed by the Stimulus, a debacle of near-Biblical proportion that did a great deal to add to the deficit and nothing to solve our economic problems. Next up was ObamaCare, then the Dodd-Frank takeover of Wall Street, the bailouts of GM and Chrysler, Cash 4 Clunkers, the student loan takeover, an avalanche of new environmental regulations, Obama’s illegal oil drilling moratoriums in the Gulf, the list goes on. At the same time that the Pelosi-Reid Congress was spending the country into ruin, President Obama was busy putting the clamps on the private sector, resulting in the lowest amount of federal revenue since 1950.

My point is that the very same Democrats who got us into this mess are the ones currently striving with all their might to keep us in it.

One would think that Republicans would have a large cache of rhetorical ammunition in the way of facts to launch against the Dems in this battle, and one would be quite correct. But have they used any of it? No. They. Haven't.

Why this is is a wonderment to me, as I’m sure it is to you. Obama, Reid, and Pelosi clearly started this mess and are now blaming the Republicans for it. But, hey, it’s what they do. If you want just a taste of what the Dems are saying, you need look no further than this quote by DNC ChairThing, Debbie Wasserman-Schultz:

“Aren’t we at the point where the closer we get to chaos, the more concern that there should be about coming to the table and compromising with Democrats?” Wasserman Schultz asked. “This is not leadership. This is almost like dictatorship. I know they want to force the outcome that … their extremists would like to impose. But they are getting ready to spark panic and chaos, and they seem to be OK with that. And it’s just really disappointing, and potentially devastating.”

So, let me see if I have this straight: We’re the extremists for wanting Washington to act in a fiscally responsible way, just like we do in our lives? WTF? On what planet do you live, darlin’, where this makes any kind of sense?

Another thing, Debbie, your psychological projection is showing: it was President Obama who recently stated that he finds the idea of being a dictator “tempting” in a speech last week before the radical racist Mexican supremacist group La Raza.

I have a few questions for the GOP: why haven’t you called the Dems’ bluff yet? Why haven’t you guys used the word “obstructionist” to characterize the Senate Democrats repeated threats to squash any bill that comes out of the House? Or even used that term for the Presidents’ same threats? That’s a game anyone can play.

Why haven’t you pointed out that all this wild spending started when the Dems took over congress in 2007? And that Obama said it was only temporary? And that he also said he wanted to cut the deficit in half by the end of his first term in office? You could even use a little bit of snark by saying you only want to help him fulfill his promise.

What are you guys waiting for? You’re clearly losing the public relations battle and yet you seem stricken by Bush’s Disease: you refuse to defend yourself with even a few simple facts that a lot of Americans already know. Facts that would work in your favor if only you'd say them out loud. Facts that would expose the Dems for the tax-and-spend radicals that they are.

You guys could be winning this and enjoying a much-needed boost in your popularity, and yet you seem reluctant to do so. I mean, hell, if I can do it, certainly you can too. It’s not rocket surgery.

You guys can’t even defend the concept of a free market economy nor point out how this administration is twisting it into something unrecognizable. All you’re doing is giving ammunition to those who wildly claim that capitalism doesn’t work. How can it, under these circumstances, when those we’ve elected to act in our place don’t understand even the basics of how our economy is supposed to work and pat themselves on the back for placing mountains of restrictions on it?

Mr. Boehner, why don’t you realize that you will be attacked for anything you do or say? You might as well be criticized for stating the truth. Doing that will strike a chord with the nation. You could step up to the podium armed with facts, yet you refuse to do so.

If you were to try to appeal to the vast majority of hard working Americans who understand what it will take to get the country out of the Obama Depression, you’d find your own and congressional Republicans’ poll numbers would start climbing, thereby preparing the ground for the 2012 elections, which the GOP stands poised to win.

Your reluctance to embrace a truly smaller government makes the rest of us who are rooting for you question whether you really want that or if you are just another big government bureaucrat in disguise. Please stop acting as if last November’s elections didn’t mean anything and that Congressional Republicans don’t have a clear mandate to stop this Marxist/Socialist administration from further crippling our country’s economy.

It’s up to you, Mr. Speaker. An anxious country is waiting for you to tell us the truth and counter the lies and propaganda coming from the radical, leftist Alinskyites who have infested Washington.

It’s time to get your own ass in line.
Posted by BackwardsBoy at 11:28 AM