How a Capitalist Sees the Economy - No Goggles!

By the way, I hereby declare today to be Economics Monday.

Here's the perfect palate cleanser for the previous post. So read the one below this one first, then read this one.

Here's a WSJ.com post by Arthur Laffer entitled, The Real Stimulus Record." In it, Mr. Laffer very neatly presents the facts countering the radical-leftist view that the federal government can cure all our economic ills, and that we have the very best people in charge of the economy.

Therein lies the fundamental problem. We capitalists know instinctively that governmental intrusion into a formerly free market can cause nothing but problems and a contraction of economic activity.

Here's some goodness and wisdom from Mr. Laffer...

If you believe, as I do, that the macro economy is the sum total of all of its micro parts, then stimulus spending really doesn't make much sense. In essence, it's when government takes additional resources beyond what it would otherwise take from one group of people (usually the people who produced the resources) and then gives those resources to another group of people (often to non-workers and non-producers).


Here, Laffer pokes a hole in Nancy Pelosi's Theory of Government Trickle-Down, where she insists that government spending has a "multiplier effect" of something like 1.6%, and is the basis for continued commitment to food stamps and welfare as the foundations of our economy, instead of the private free market.

Sorry, Keynesians. There was no discernible two or three dollar multiplier effect from every dollar the government spent and borrowed. In reality, every dollar of public-sector spending on stimulus simply wiped out a dollar of private investment and output, resulting in an overall decline in GDP. This is an even more astonishing result because government spending is counted in official GDP numbers. In other words, the spending was more like a valium for lethargic economies than a stimulant.

I'd say the Stimulus Bill was more like a Roofie slipped into our economic drink. It has allowed the proponents of big-government policies to, shall we say, take advantage of us while we were asleep. 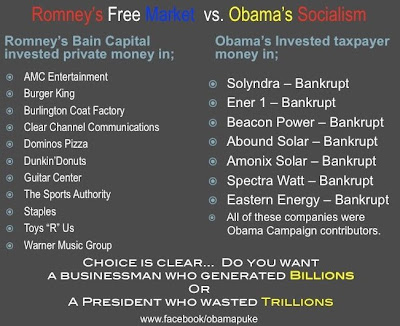 Posted by BackwardsBoy at 12:13 PM