How a Progressive Sees the Economy - Through Beer Goggles, Apparently

If you want to know how and why our economy is in the pathetic shape it's in today, I found this post over at the Denver Post site, Could supply-economics help the economy? No.

Penned by Mark Weisbrot of the progressive Center for Economic and Policy Research, it's a very government-centered view of the economy.

It's also wrong. And proof of my BackwardsBoy Postulate #1 Concerning Progressives: they cannot count.
The author's title gives away his ignorance of free market economics, and his post dissolves into a Krugman-esque mishmash of governmental "solutions" to our economic problems.

It's all government, all the time for Progressives. The free market isn't even considered in their economic plans.

The right says we can't borrow and spend our way to full employment, but there is no economic basis for their arguments. In fact, the federal government can borrow at 1.6 percent interest today for 10-year bonds. This is basically free money; and for those who want it to be absolutely free, the Federal Reserve has created $2.3 trillion since 2008 and can create more if the federal government is willing to spend it.


Um, Mark, there is a very sound economic basis for our arguments. It springs from something you cannot understand: free people engaging in commerce. It works every time it's tried.

It's also what you and your fellow travelers deny in the face of facts.

What we have here is a failure to communicate the basics of a free market and how wealth is created. The federal government absolutely cannot do it. Period. Nada. FYNQ.

When it comes to government spending, we've tried that during this Obama administration. Does anyone remember the $787B spent in the Stimulus Package? The one that was supposed to keep the unemployment rate under 8%? How's that working out?

Cat got your tongue, Mark? Here's a reminder for you... 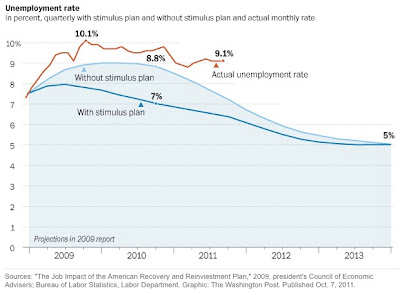 The red, squiggly line in this chart shows where our U-3 rate has been since the Stimulus Bill was passed. The "With stimulus plan" line shows the projections of the rate, um, with the stimulus plan.

So, Obama, Reid and Pelosi spent $787B for a higher unemployment rate that we're supposed to accept as the "new normal?" When everybody pretty much remembers it was half that just a few years ago?
With people in charge (and make no mistake about it, Progessives are in charge) of this economy cranking out new regulations and taxes literally by the hour, it's little wonder we're in the mess we're in.

Here's a Pro Tip, Mark. Try using one of those calculator thingys once in a while. The ones with the big buttons on them like they make for first-graders. If you need help using it, just ask.

And here's a term you should search: "Free market economic theory."
Posted by BackwardsBoy at 11:24 AM

What the progressives don't understand is that government can only get money OUT of the economy. Consider: before Uncle Sam can spend any money, he has to take it AWAY from the people. Then, deduct the cost of administering the tax, and put back a portion of what was taken. Private investors, on the other hand, obtain funds from savings, and move those funds into the economy where they are multiplied exponentially.

The so-called progressives are trying to fill a bucket up by dipping water out, and then pouring it back - - and they're spilling a portion of each dipper-full.